Munira parent’s fled the gruesome Somali civil war, which has left countless displaced and suffering at the hands of famine and violence. With this in mind, Munira began her education advocacy at age 13. She founded an NGO, Lighting the Way, galvanizing East African youth to empower girls through education. LTW provides a platform for young people to raise their voices and work together to solve some of the world toughest humanitarian issues. Munira also aided the passage of the International Protecting Girls by Preventing Child Marriage Act of 2011, making child marriage a priority in US foreign policy, and in 2013 became a part of the Violence Against Women’s Act. 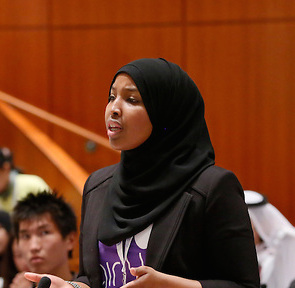